Hosted by the ITEA Southern Nevada and Antelope Valley Chapter

This workshop focuses on the use of test instrumentation and resulting data. From the sensor to the shooter, to the display in the control room, and finally the plot in the test report, we all use instrumentation.

Future Test and Evaluation will take place with limited resources on both sides—the equipment and the people who use it. With the ever-increasing complexity of test articles and decreasing schedules and budgets, T&E organizations have begun searching for new ways to instrument, test, and evaluate aeronautical systems. Facing shortages in equipment, capabilities, and personnel, today’s T&E leaders must unleash their people to innovate to plan, provision, and conduct missions safety and effectively.

Our goal is to identify and address those instrumentation and data issues and challenges faced by the flight test community. Please join us at the 2019 ITEA Test Instrumentation Workshop to share your experiences, lessons learned, and solutions to the problems we face in today’s constrained test and evaluation environments.

This workshop is centrally located in the U.S. South West Range complex, the largest test and training range in the world. Home to Air Force, U.S. Army, U.S. Navy, NASA, and commercial test and training facilities, it also encompasses some of the most innovative and leading-edge aerospace companies in the world.

Why Should I go to the ITEA Test Instrumentation Workshop?

For over 35 years the International Test and Evaluation Association (ITEA), a 501(c)(3) not-for-profit education organization, has been advancing the exchange of technical, programmatic, and acquisition information among the test and evaluation community. ITEA members come together to learn and share with others from industry, government, and academia, who are involved with the development and application of the policies and techniques used to assess effectiveness, reliability, interoperability, and safety of existing, legacy, and future technology-based weapon and non-weapon systems and products throughout their lifecycle.

Virtually everyone involved with Test and Evaluation has had to deal with accelerated test plans, limited manpower, red tape, broken test articles, and of course, a shrinking budget. However, seldom do the expectations of the customers or the demands on our war-fighters decrease with the corresponding lack of resources. We must accomplish the mission! Our war-fighters, our citizens, our allies, our country depends on it! So, how do we accomplish the mission on a constrained budget? When we are limited to funds that will barely keep us “running”, much less accelerating, what do we do? This is the focus of the 2019 ITEA Test Instrumentation Workshop: Shaping the Future of T&E. We invite you to come and share lessons learned, new solutions (material and non-material) and more efficient

Our aerospace ranges and test facilities are national assets which utilizes resources that are very relevant to the instrumentation community. Personnel from these facilities attend this event to promote and stimulate technical growth in instrumentation and its allied arts and sciences. This is accomplished through participation in technical forums, educational activities, and technical publications. It is highly recommended that test and instrumentation personnel participate in the event in order keep our mostly commercial-off-the-shelf instrumentation science capabilities (flight test instrumentation, telemetry data acquisition, and data display) at a sufficient state to promote safe and effective test and evaluation.

Participation in the event ensures that today’s test professionals learn test best practices from industry, other government agencies and partner nations.  Use of advanced commercial instrumentation and measurement in test and evaluation increases safety, reduces cost, schedule and technical risk to the developers to ensure deployment of mission effective and suitable systems that will ultimately benefit the war-fighter. Exposure at events such as these ensures the test professional stays current in its telemetry capabilities to support flight test. 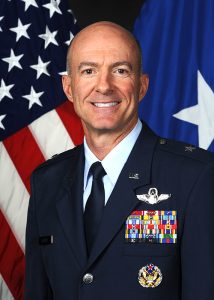 General Azzano has flown more than 2,900 hours in 35 aircraft types as an instructor pilot, evaluator pilot and experimental test pilot. He has conducted developmental tests on a wide range of aircraft and weapons, and has commanded at the squadron, group and twice at the wing level.

General Azzano is a graduate of the Air Force Intern Program, the Air Force Legislative Fellowship and the Air War College. He holds master’s degrees in aerospace engineering and strategic studies. He was previously assigned as Director, Air, Space and Cyberspace Operations, Headquarters Air Force Materiel Command, Wright-Patterson Air Force Base, Ohio. In this position, he was responsible for shaping the workforce and cyber-secure infrastructure for operations to test, field and sustain agile war-winning capabilities. He was also responsible for the command’s flight and test policy, and resource allocation for flight management, airfield services, weather services and command and control operations and plans. 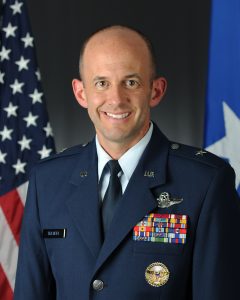 Brigadier  General “Dragon” Teichert is the Commander, 412th Test Wing, Edwards Air Force Base, California. He leads a wing of 7,847 personnel in the developmental test and evaluation of the F-35, KC-46, F-22, F-16, B-1, B-2, B-52, C-17, C-130, KC-135, Global Hawk, joint remotely piloted aircraft and emerging technologies. Additionally, General Teichert is the installation commander responsible for operating the base and supporting more than 11,000 active duty, reserve, civil service and defense contractors at Edwards, the second largest base in the U.S. Air Force.

General Teichert, a native of Port Angeles, Washington, received his commission through the Air Force Reserve Officer Training Corps program at the Massachusetts Institute of Technology in 1994. Throughout his career General Teichert has held a variety of operational, instructional, test, and leadership positions. He has directed the F-22 Combined Test Force and commanded the 411th Flight Test Squadron, responsible for F-22 Raptor developmental test and evaluation. He has also commanded the 53d Test Management Group, providing operational test and evaluation of USAF fighters, bombers, combat search and rescue systems, remotely piloted aircraft, aircrew training devices, aircrew flight equipment, weapons, and space systems. He has served as the Deputy Director of the Department of Defense Special Access Program Central Office, responsible for the governance, acquisition, oversight, protection, and external liaison for all DoD programs protected under special access controls. Most recently, General Teichert commanded the 11th Wing and Joint Base Andrews, responsible for the security, personnel, contracting, finance, medical and infrastructure support for five wings, three headquarters, and over 80 tenant organizations, as well as 60,000 Airmen and families in the National Capital Region and around the world.

Each of the 4-hour Pre-Workshop Tutorials provide 4 contact hours of instruction (4 CEUs) that are directly applicable to your professional development program, including the Certified Test and Evaluation Professional Credential (CTEP).

ITEA is a 501(c)(3) professional education association dedicated to the education and advancement of the test and evaluation profession. Registration fees, membership dues, and sponsorships are tax deductible.

The Tuscany Suites and Conference Center